That was…The Year of the Dog: Watson

We conclude our series of Year of the Dog blogs with this amazing globetrotting pooch called Watson and owned by Kate. Read how Watson spent time on the QMII cruise liner and then travelled around the UK.

Watson made the most of the Year of the Dog! He scampered into the year in Iowa in the midwestern US, where winter means romps in the snow and naps by the fire.

His puppy energy wasn’t well suited for hibernation, so he got to work becoming a Very Good Dog at obedience class. He completed all three levels of basic obedience, then managed to fit tricks class and therapy dog training into his rigorous schedule of guarding the house and destroying toys. He celebrated his first birthday with giant biscuits and a few new toys to demolish.

As the weather warmed up he turned his attention to testing the local ice creams and helping in the garden. One of his favorite humans moved away in June, so Watson insisted on a road trip to visit him in July, and had a wonderful time exploring his friend’s new city. Back at home, he happily resumed his summer routine of walks, playtime, and cooling off on top of the air conditioning vents.

His world was soon disrupted, however, as his mum moved to London and Watson found himself staying with his grandparents and his best buddies, Winston and Conan, for a prolonged summer camp. He spent the next few months snuggling with his grandpa and helping his buddies defend the yard against land- and tree-based attacks by local wildlife.

In October, he embarked on the biggest adventure yet, saying goodbye to his puppy buddies and joining his grandparents for the cross-country drive to New York. Four days later, they set sail on the Queen Mary 2. Onboard he was treated like royalty, with gourmet meals, doting kennel masters, and his very own custom coat. The week flew by, and before he knew it they were disembarking in Southampton.

After a short drive to London, he was reunited with his human. He has loved settling into his new home and exploring the city. He loves walking along the Thames, and has become a pro at riding the tube and relaxing in the pub. He keeps the local pigeons and foxes on their toes, and enjoys running around with his new dog friends at daycare.

Many of his favorite humans came all the way from the US to visit him for Christmas, and he spent 10 days taking them to all of his favorite sights, teaching them about big city life, and letting them feed him countless biscuits. He hated to see them (and the biscuits) go, but was happy to get back to exploring all the dog-friendly offerings in and around London, even venturing to the Cotswolds on a weekend getaway. He is sure he will have many more adventures in the year to come, but it’s going to be hard to beat the Year of the Dog! 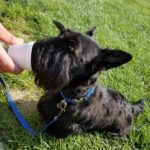 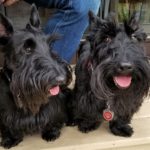 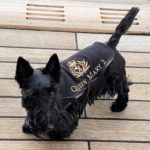 On board the QM2 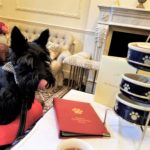 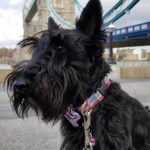 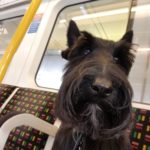 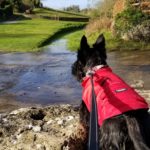